New Theatre will re-open to covid-safe audiences this Wednesday 9 September with a production of Lally Katz’ Neighbourhood Watch, directed by Louise Fischer. 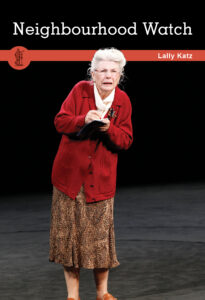 “Many people will want to kill you. Better you is ready.”

Ana is a battle hardened Hungarian-Australian veteran of the twentieth century. Catherine is her neighbour: a 20-something aspiring actress waiting for a better world.

As their unlikely odd-couple friendship develops, Catherine’s life is transformed by Ana’s stories of the traumas of war, the desolation of the refugee experience, and the struggle of settling in a foreign land.

In turn, Ana is granted one last great friendship at a time when the journey to her life’s end was looking to be a lonely one.

This glorious comedy about hope, death and pets, takes on a sense of enormity in the midst of the ordinary, questioning whether we really know what’s out there in the ‘burbs’.

Get your copy of Neighbourhood Watch here!